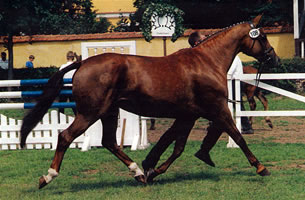 Elbe IV (Ellie) is a 1988 liver chestnut Trakehner mare, who was registered in Germany with scores of 9,8,7/7,8,8/8 for a total of 55 points. That, and her mare performance test scores made her a Verband Premium mare. She also carries the title of State Premium mare and has already produced a number of offspring.

Among them is the Trakehner Verband premium mare Elbenau (by EH Caprimond) with placings at A level in dressage (Elbenau is today a broodmare in Germany), the chestnut stallion El Rock F (by EH Rockefeller), who wins shows and placings in his FN records at L levels in dressage and eventing, and A level in show jumping, the gelding Edwin Forever (by EH Tenor) who has wins and placings at A-level in dressage and the chestnut bay gelding Estephan by EH Michelangeo, who is an internationally successful, S level driving horse in Europe!

Elbe was a brood mare at the famous Gestüt Webelsgrund in Germany prior to her sale to Christine Williams in Canada, where she arrived in foal to EH Michelangelo and produced a colt for Luxesporthorses, Exspresso. Elbe also had foals at Webelsgrund by Glanzlicht, the 1994 Champion stallion in Neumünster. Elbe placed high and won classes at the National Mare Show in 1994 in Germany and is a very good example of a high quality Trakehner brood mare. She comes from a highly fertile, easy-to-keep mare family and displays outstanding Trakehner type and temperament. The quality of her offspring is above average both in breeding and competition and Elbe fulfills all requirements for the Trakehner Verband “Elite” status.

Elbe’s sire Anduc received Elite status from the Trakehner Verband in Germany due to the success of his offspring in dressage and because he was able to establish a dominant stallion line. Anduc himself was trained to S level in dressage, but never competed. At the time of his approval and performance test, he was considered one of the best stallions in Germany due to the exceptional combination of Trakehner elegance with athleticism and movement quality. As a sire, Anduc produced the influential stallions EH Angard, Le Duc, Hailo *Pg*E*, and Schiffon *Ps*. Many of his daughters are dams of approved stallions, including SPS+PS Baroness XII (dam of Beron Verdi), Bernina V (dam of international show jumpers Balisto Z and Budweiser Classic), or elite mare Priscilla II (dam of Pyatt Charly). While the most prominent feature of Anduc’s heritage will always be the dressage potential his offspring carry, he is often found in more versatile pedigrees, including that of the CCI**** eventing mare Karascada TSF (dam sire) or the CCI*** eventer Karambeau M (dam sire).

Anduc’s pedigree is based on an often repeated cross in the dam line – namely that of the great riding horse sire Ibikus with the foundation stallion Impuls. The same principal also produced stallions like Vincent, EH Van Deyk, Valerian, Kostolany or Kassius. And some of the breed’s most important stallions ever came from Ibikus daughters. That includes EH Gribaldi, EH Sixtus, EH Van Deyk, and Induc, for example. Equally successful is Anduc’s sire line, which goes back to the substantial stallion Gabriel. His son Halali produced three sons: EH Marduc, EH Hyllos and Atoll. Hyllos is one of the most successful dressage sires in the breed to this day, and his approved son EH Solero enjoyed an international career at Grand Prix level for many years, while EH Marduc gave the line a second, strong dressage branch. His sons EH Lehndorffs and EH Herzzauber have produced approved stallions, outstanding brood mare daughters and competition horses at the international level.

Elbe’s dam Elbe II was an accomplished brood mare in Germany. Among her foals, 5 were registered FN performance horses: Elba by Morgenglanz was a show jumper at L-level, Elbico by Ibikus show jumped at A-level, Elke by Ibikus showed in dressage, eventing and show jumping successfully at A level, Ebony by Mahagoni was a L-level dressage horse and Edelmann by Mahagoni won FEI shows at S level in dressage!

Elbe II’s sire Hartung remains in the books as one of the top show jumper producers ever. This very powerful chestnut son of Ilmengrund was sold to Sweden, where he was popular in the local warmblood breeds. A significant number of Hartung-progeny made it into the M and S levels in Germany, almost exclusively in show jumping. In the breed, it was primarily his son Padparadscha who helped to spread this line. Padparadscha is the dam sire of the exceptional stallion Sir Chamberlain, and also produced the mare El-Amarna, whose two sons Eichendorff (Germany) and Eligius (ATA) stood for the breed. The other Hartung son who continued the line to this day was the chestnut Symbol. His son Heldenberg was the best jumper of his approval in Neumünster. Hartung’s sire Ilmengrund was an “experiment” and resulted from a cross of Humboldt with his own daughter Ilona, who in fact, was a full sister to the great Impuls. Ilmengrund had little to do as a breeding stallion, but his influence on some families is undeniable. Hartung’s dam line of Halensee is very well known and was most prominently bred at Gestüt Birkhausen in South Germany. This family also produced the ATA’s Horizon as well as EH Hohenstein.

The second dam sire Jonkheer xx was a very good German Thoroughbred stallion at his time and gained some influence in the Trakehner and Hanoverian breeds. His pedigree traces back to legendary Teddy xx, who was not only a great race horse producer, but is very important as a refinement and improvement sire in the German warmblood breeds. Jonkheer xx was a Celle State Stud stallion in Hanover in the 50s and 60s. In the Trakehner breed, it was almost exclusively the Elfe-family that he was used in, with very good results. Apart from Elfe, he also helped to expand a branch of the big Toga-family through his daughter Toscana II. Her branch of this family, with several daughters, stand for the two approved stallions and good show jumpers Topas and Torpedo, both by Schwalbenzug.

A striking feature of the maternal sire of Elbe’s pedigree is the heavy inbreeding on Humboldt, the last East Prussian Champion stallion before Trakehnen was destroyed during the Second World War. Humboldt and his direct son Impuls, as well as his grand-son Ibikus appear no less than 6 times. However, one can’t argue with the obvious “nick” this cross is. Humboldt, besides Impuls, also produced the top stallions Thor and Heros. Thor proved to be very valuable as a sport horse sire in the local Hessia warmblood breed, and is the dam sire of the ATA’s Hailo. On the other hand, Heros emerged as a very versatile sire and his line is especially strong via Tümmler (later ATA) and his sons EH Tenor and EH Tivano. Impuls himself also sired the very influential stallions such as Auftakt, Baron, Karneol, the top show jumper producer Kassius, Mikado (ATA), Schwalbenflug, Schwalbenfreund, Schwalbenzug, or Schwarzdorn. Especially Kassius stands out as a top producer (sire of e.g. Suchard, dam sire of e.g. Inster Graditz or the CCI**** eventer Salino). Impuls’ greatest contribution were size and better foundations during his time, and many of his outstanding daughters became important brood mares with sons to follow up: Schwalbenlied, Kaprice II, Kassiopeia, Valerie, Victoria, Traviata or Zauberspiel stand out. It is interesting to see this kind of accumulation of Humboldt and Impuls blood in one mare, especially given her Arabian and TB roots in both dam and sire lines (Adamas ox, Jonkheer xx, Pindar xx, Maharadscha). Clearly a great part of the high quality that Elbe IV embodies can be linked directly to her outstanding “mix” of Trakehner foundation lines with high quality refinement blood on the basis of a very solid mare family.

While Elbe IV belongs to the family of O100A1 Eleganz ( v.Lenski-Kattenau), the family was founded by the grey Elfe by Adamas ox, who was born in 1940 and died in 1971, 31 years old! This family, out of closest maternal relation to Elbe VI, also produced e.g. the stallions El-Zid, Eichendorff, Eligius (ATA), Element of Surprise (ATA), Erzsand (Germany & ATA), Exclusiv, Elitär, Effekt, Emeer (ATA), Elfenglanz, Elfenspuk, Extravagant, the 2008 Trakehner Riding Horse Champion Elfado, the 2002 champion Elfengeist, Elfenfeuer, as well as the outstanding grey Maharadscha-son Etong, who was equally valuable as a top performance horse and sire of such performance horses. The mares Etikette, Eleganz, Elfenglück, Elfenspiel II, Elba, Eloge, Elritze, Ettmaus and Etüde, many of them elite or premium mares, spread this family all over the world.

Ellie produced “Expressive”, a beautiful filly for us by Imminence in 2011 and a very handsome colt “Sterling” by Sir Gregory in 2012.