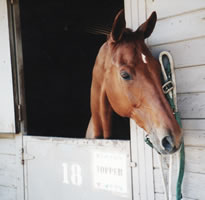 Top Priority, lovingly known as Topper was bred by Dressage trainer Leslie Webb in California. He was then sold to a lady by the name of Janet Cole who took very good care of him and taught him lots of fun tricks like bowing for carrots and tag with humans. Unfortunately while Janet had him he fractured his hip against a tree while in pasture. Lucky for him Janet took very good care of him with daily walks and lots of chiropractic visits. The chiropractors did a good job with him but he would never be the same, you could see where the injury had been and created what looked like a hunters bump on his hind end. 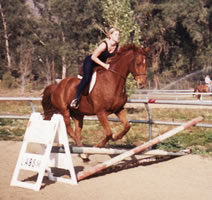 After years Janet had started to have her own family and didn’t have time for Topper. He was sold to Deborah in Malibu, California. Her daughter wasn’t riding him either and I think he was a little too spunky of a horse for Deborah. So luckily one day when my trainer was looking through a horse trader magazine for me she came across Deborah’s ad for him. At the time I was 15 and hadn’t developed a favorite breed yet and had been riding Warmbloods, Quarter Horses, Arabians and Thoroughbreds. I had a huge desire to do jumping at the time even though my trainer was primarily teaching Dressage.

So we went to Malibu and saw him. He was full of spunk but a good boy and his back was very sore. So we took him home and I worked on his back with massages and chiropractic. I was soon jumping him but much to my dismay he would buck after every jump! After one close call with my head and the metal arena fence I thought I better quit the jumping for a while even though he was great at it. I was asked by my other friend and trainer if I would like to join her Quadrille team. 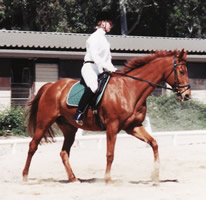 Pretty soon I was trailering twice a week to the barn to practice with my team and I became the captain of The Riding Company. I also became addicted to Dressage and never jumped again. Between 1998 and 2003 I was showing consistently and winning! We did very well at Intro Level Dressage and even won $100 at a championship show in Moorpark, CA. We were also doing very well at the Quadrille and showing almost every month during the show seasons. Unfortunately the judges weren’t as educated on Quadrille so we would educate them before we would ride our tests, we told them that they needed to look at our synchrony, spacing and alignment and not so much at our individual dressage skills. 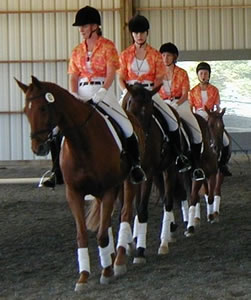 In 2002 we were doing so well we decided to go to the Quadrille Championships in Paso Robles where were judged by Elizabeth Searle who brought Quadrille to the United States. We did so well we received every possible award at our level not to mention several scores in the 80% range. We received a fun perpetual trophy, ribbons, medals and even a bucket and tool box. It was definitely the highlight of my career with Topper and for many of the girls on my team as we all went our seperate ways after that year and two of them stopped riding altogether. We are still featured on the California Quadrille Website and we are on the front of the What Is Quadrille brochure. Our trainer Michele Purpora-Tardi is now the president of the California Quadrille Association as she is such a wonderful and knowledgable trainer in Quadrille.

We reached 1st level and we were doing pretty well but you could tell he wasn’t going to go much beyond that due to his injury. In 2003 I decided to follow my Mom to Montana where I could have open pastures to ride, play and retire Topper on. He absolutely loved the open pasture and as soon as I let him and my mare Ogellee out of the trailer he ran and ran, you could tell was having fun. After two weeks of being in Montana I was hit with the biggest grief of my life I went out to see him in the pasture only to find him with a broken knee. We quickly called the vet out but it was irrepairable especially since he was already 20 so I was forced with the decision to put him down. That was when I decided to call my farm Top Priority Trakehners, after my first beloved Trakehner. He was an excellent first horse to learn everything on, he had a great mind and a kind heart and because of him I will be forever bound to the Trakehner breed. 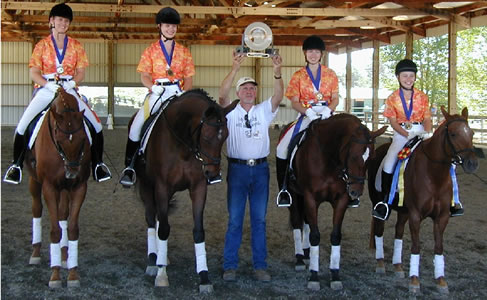