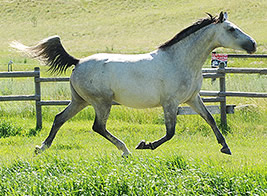 Liana is a big beautiful mare with a very strong body that is amazingly sound, she is the type of horse that will never go lame. She is easy to train and has a very sweet disposition. She will make an amazing jumper, eventer, amateur Dressage horse or broodmare. She was born a chestnut color and has slowly been turning grey which has made her a beautiful rose grey color for many years. She has big beautiful eyes which catch a lot of attention from admirers. She has amazing bone and nice large hooves which have never needed to be shod even when riding mountain trails. She has very correct straight legs which she has passed on to her first foal along with her great color. She was started under saddle at 3 due to her size and great temperment. She has proved to be very kind and was always willing to please and go forward, plus very brave on the trails. She had 2 years off to have her foal but in all she has had 3+ years under saddle and 6 months of dressage lessons with cavaletti work. She is currently back under saddle and has begun work over fences.

In 2008 we took Liana to the Annual Trakehner Convention in Los Angeles to have her inspected. She received great scores and tons of wonderful comments. Her scores were 8,8,7,7,7,6,7 with a total of 50 points which put her into the Official Stud Book for the American Trakehner Association. Some comments from the judge Sam Eidt were: Good head and gender type, short croup with good connection, nice slope of pelvis.

Liana produced a wonderful foal for us in 2010 by Martini. To view her foal Linux please see our sales page.

Liana has excellent & rare bloodlines with a potential for creating powerful sport horses for the aspiring breeder. Liana is one of the last daughter’s of her sire Hansel. He was a great competition horse and represented the famous Humboldt – Impuls line, which is predominantly found in jumper pedigrees today. A very famous branch of this line extended from Impuls via his son Kassius to the great stallion Suchard. He was an international show jumper, and the first Trakehner ever to be approved in the show jumper stud book of Zangersheide (Belgium). Suchard sired many outstanding competition horses in eventing and show jumping. One approved son with such a record was Balisto Z, who was also Zangersheide approved. The great power and depth of body this line stands for can still be seen in Liana’s conformation today.

On her dam side, she introduces much needed refinement blood through two tremendously important stallions: Marlon’s sire Pasteur xx, a foundation sire in the Trakehner breed and the origin of the successful Mahagoni line. This line today is best represented by Kostolany, his son E.H. Gribaldi and the dressage wonder stallion Totilas! The other source of high quality refinement blood comes via Burnus AA, sire of Elite Mare Tugend III, the dam of Topas II. Tugend III also produced the German premium stallion Tolstoi and the international show jumpers Trenk Quattro and Tiflis. Her daughter Titania is dam of the versatile producer Tycoon, while her other daughter Turandot is dam of the nice sport horse sire Turnus. Burnus AA of course is also know as the foundation stallion of the international eventing line of Habicht – E.H. Sixtus and Habicht – Windfall *Pg*. What we find so exciting about this pedigree is the line-breeding to Burnus AA. Liana’s foundation dam is the Anglo-Arabian half blood Amsel, who was a FULL sister to Burnus AA!. This great family also stands for the German Champion stallion and S level dressage winner Le Rouge and the two-time Olympian eventing mare Larissa *Pg*. 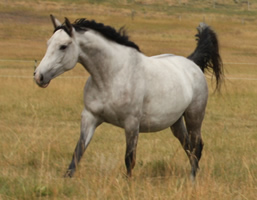 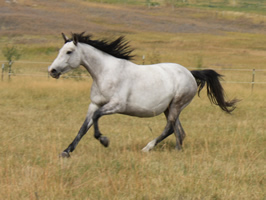 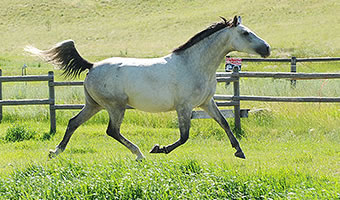 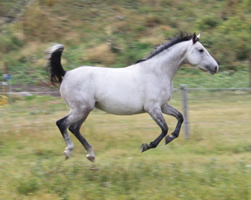 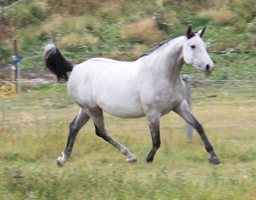 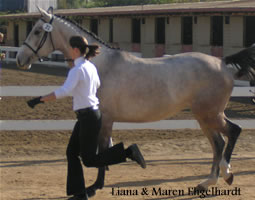 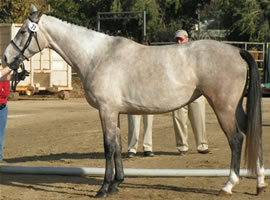 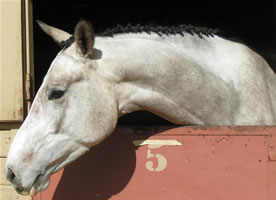 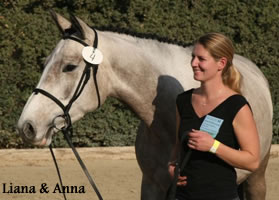 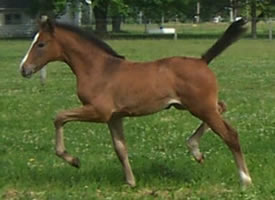 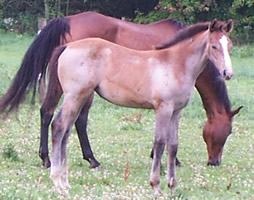 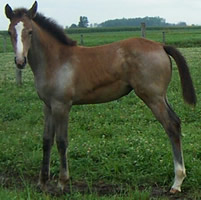 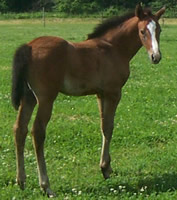 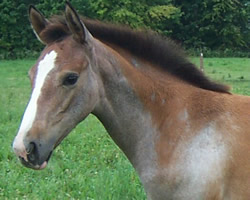