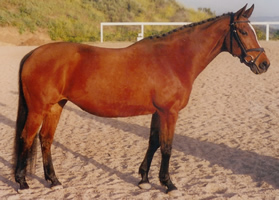 Ogellee is one of Top Priority Trakehner’s Foundation Mares. She was bred by Catherine Power in Thousand Palms, CA.

Ogellee was approved in Sherwood Park, Canada into the Preliminary Stud Book of the American Trakehner Association at 16 years old in 2004.

Ogellee is out of Oaklee’s Pandera xx and by Memphis. Ogellee had the sweetest temperament possible which made her and her foals very tractable. Combined with that she had incredible movement, correct conformation and a beautifully refined head, coming from her Trakehner blood.

Her sire, Memphis, comes from the popular Flaneur lines. Her Dam’s lines date back to famous thoroughbred lines such as Man-O-War.

Ogellee produced top quality foals with the best personalities. Due to an injury to her knee her showing career was cut short but she was winning consistently in the show ring in halter and dressage classes. This also made it a challenge to get her inspected as she was not able to perform the requirements. However Brad Kerbs, the president of the American Trakehner Association approved her based on her ability to create such a nice foal which was Ossette, our first filly. Brad later told us that “some breeders try 20 years to get a foal that nice.” This was really nice to hear and inspired us to further pursue our breeding dreams.

After Ossette she produced another outstanding foal, Onora who shows tons of promise.

We had to make a hard decision this year and put Ogellee down as her knee got worse and made it hard for her to walk. We will never forget Ogellee and will forever be grateful to her for getting our breeding program started with her beautiful daughters.